The School’s Principal, Miss Harita, began dance lessons at The Richmond Academy, at four years old, under the tutorage of the late Eileen Meacock MBE. Lessons were then at the school’s old site in Richmond which has since been commercially developed but still resonates in the hearts of those who knew it with the sound of strict but nurturing instruction, and Eileen’s mother playing classical piano for the protégés.

Miss Harita is a graduate of Roehampton University, has served on the board of the NATD, is an examiner for the Association, and has been the protagonist and writer of an highly acclaimed Syllabus for Contemporary Dance. Miss Harita’s appreciation of the art form, sympathetic understanding of her pupils, is confirmed by a dedication to the very highest standards of teaching. 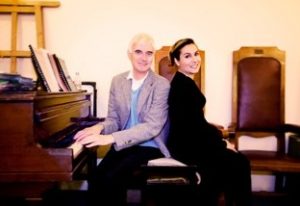 Children’s Classes are offered from 2 1/2 years old. Teaching takes place in the heart of Richmond, at Parkshot, six days a week. All subjects are examined and the pass rate is exceptionally high. The Distinction attainment rate is very high.

The National Ballet syllabus is designed for the development of the basic skills and technique of classical ballet. There are Eight Grades preceded by Preliminary and Class Examination levels, which may be taken from the age of four years. The National Tap syllabus provides an exciting and stimulating way for pupils to develop and flourish, whether they wish to become a professional dancer or merely treat dance as a very healthy hobby. With technique that becomes increasingly sophisticated by Grades, students combine rhythm and timing to create joy from this very vigorous and rewarding art form.

Contemporary dance emerged in the 1950’s, after the Modern and Post-Modern movement, combining elements of these with Classical Ballet. The NATD Syllabus was conceived and created by Miss Harita and encompasses Six Grades. Students interpret, create and execute routines based on ideas emanated and evolved  from the pioneering choreographers of our time such as Martha Graham, Merce Cunningham and Jose Limon. 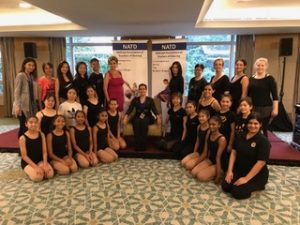 Eileen Founded the Richmond Academy of Dance in 1952 and was awarded an MBE by The Queen in 2011 for services to Dance.

A career in dance commenced at the age of five. Eileen dedicated herself to Tap and won many Sunshine Dance competitions. Taking up Ballet at the age of eleven, Eileen’ s commitment to the art was demonstrable by the completion of all five grades of the RAD within a mere two years. An Advance Certificate and the Licentiate of the ISTD were achieved after continued training with Phyllis Bedells. Tom Parry and Joan Hardy were also to be instrumental to further accomplishment in Tap and Modern Dance. 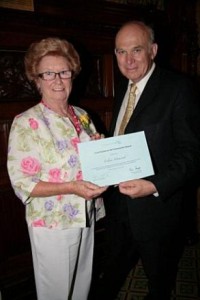 A professional dancer, trained in Latin American by Dimitris Petrides, and Ballroom by Bob Garganice, Eileen taught at the latter’s famous Richmond venue and performed extensively on Television and the West End stage, before opening her own studio.

Eileen joined the National Association of Teachers of Dancing (NATD) in 1947 and served as its President for 1997-1999.

Her legacy, charitable spirit, and dedication to the Academy and its pupils continues. 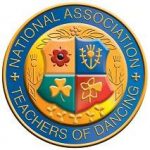 Contact us: hello@richmond.academy
© 2021 Richmond Academy Of Dance
We use cookies on our website to give you the most relevant experience by remembering your preferences and repeat visits. By clicking “Accept All”, you consent to the use of ALL the cookies. However, you may visit "Cookie Settings" to provide a controlled consent.
Cookie SettingsAccept All
Manage consent

This website uses cookies to improve your experience while you navigate through the website. Out of these cookies, the cookies that are categorized as necessary are stored on your browser as they are essential for the working of basic functionalities of the website. We also use third-party cookies that help us analyze and understand how you use this website. These cookies will be stored in your browser only with your consent. You also have the option to opt-out of these cookies. But opting out of some of these cookies may have an effect on your browsing experience.
Necessary Always Enabled
Necessary cookies are absolutely essential for the website to function properly. This category only includes cookies that ensures basic functionalities and security features of the website. These cookies do not store any personal information.
Non-necessary
Any cookies that may not be particularly necessary for the website to function and is used specifically to collect user personal data via analytics, ads, other embedded contents are termed as non-necessary cookies. It is mandatory to procure user consent prior to running these cookies on your website.
SAVE & ACCEPT